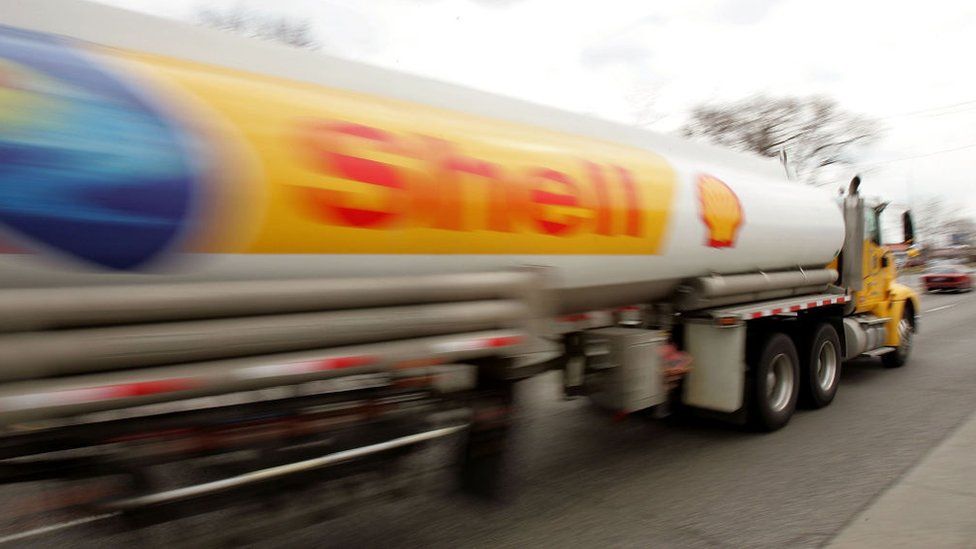 Energy giant Shell has reported its highest ever quarterly profits as oil and gas prices surge around the world.

Shell made $9.13bn (£7.3bn) in the first three months of the year, nearly triple its $3.2bn profit it announced for the same period last year.

But the firm said pulling out of Russian oil and gas due to the Ukraine conflict had cost it $3.9bn (£3.1bn).

On Tuesday, rival BP also reported a sharp rise in profit, but the UK has so far ruled out a windfall tax.

The invasion of Ukraine has helped oil and gas prices skyrocket. Russia is one of the world’s major exporters but Western nations have pledged to cut their dependence on the country for energy.

Oil prices were already rising before the Ukraine war as economies started to recover from the Covid pandemic.

“The impacts of this uncertainty and the higher cost that comes with it are being felt far and wide.

“We have been engaging with governments, our customers and suppliers to work through the challenging implications and provide support and solutions where we can.”

Shell rivals, including BP and TotalEnergies have also reported a sharp rise in underlying profits.

Norway’s Equinor, which supplies a quarter of the UK’s gas, also posted record earnings on Wednesday.

Shell’s profits were expected to be big.

The price of oil and gas, already high at the end of last year, surged higher after the Russian invasion of Ukraine threatened disruption and eventual boycotts of one of the world’s biggest suppliers of energy.

These numbers surpassed those lofty expectations.

The question now is what Shell will do with all this money.

The company paid out £4.3bn to shareholders, which include millions of pension savers, in the last quarter and said it plans to dish out roughly the same in the next three months.

Shell has already said it will invest £20bn to £25bn in the UK in the next decade in low carbon energy and in UK gas and oil supplies.

Ministers will be watching closely to make sure Shell delivers on those commitments.

It’s the promise of investment that is standing between UK oil and gas companies and the windfall tax opposition parties have called for but the government has so far resisted.

The high prices of oil and gas are pushing up the cost of living around the world.

In the UK, inflation is running at 7%, its highest rate for 30 years, as energy bills, fuel costs and food prices jump.

The Bank of England is set to make an announcement on interest rates on Thursday, with speculation it will lift borrowing costs to temper inflation.

One of the main contributors to UK inflation has been fuel prices, which are near record highs and could stay that way for months, according to some analysts.

Demand for diesel has grown as the popularity of online shopping deliveries remains high, and inventories are low in the US and Europe.

Russia is a major exporter of diesel, but the Ukraine invasion has made access to that limited.